Your cart
Your shopping cart is empty
Sub-total $0

Feel good by contributing – help others to gain clarity on their sexual health. Note: TBD Health Inc. is not a non-profit.

STD testing, the way it should be
Take our sexual health questionnaire to find out what tests are right for you
Take the questionnaire
go wild!
on
off
back
5 minutes read
Jan 1, 1970
article
How accurate are TBD's at-home tests? 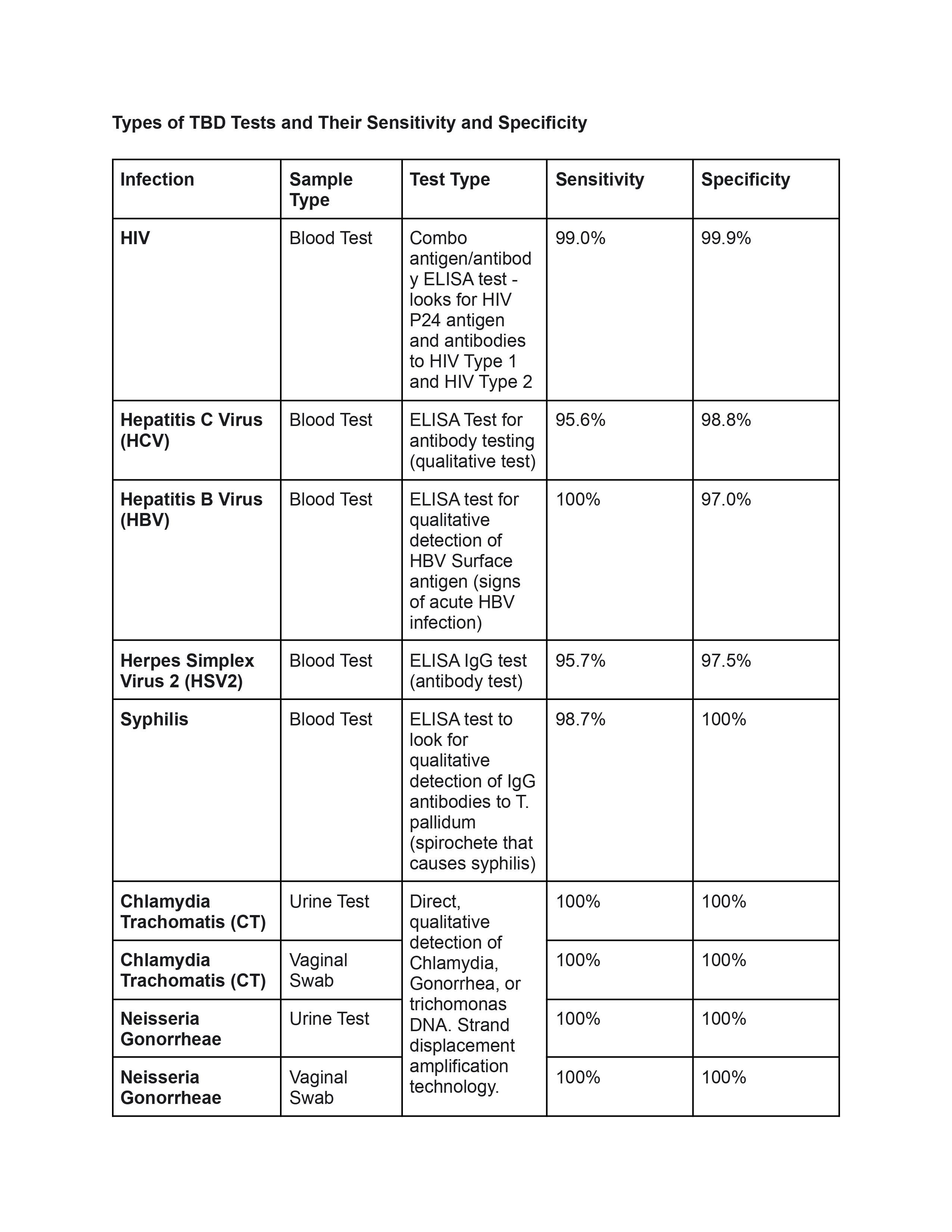 How accurate are TBD’s at-home tests?

There is no such thing as a perfect test in medicine, but TBD’s tests are highly accurate and similar to what you would find in a medical office. We work with a lab whose tests have been fully validated by state and federal guidelines, including CLIA and College of American Pathologist Standards (aka the best of the best).

TL: DR: _The higher both the sensitivity and specificity, the more you can trust the results, whether positive or negative. TBD’s tests are both very specific and sensitive! _

Sensitivity is a measure of how good that test is at finding an infection when it’s there. In technical terms, it tells us how often a test correctly identifies a positive result for someone who has that condition, or a true positive.

Every test in the medical field, whether it’s imaging or a swab or bloodwork, is subject to some error. Some reasons that tests become less accurate include:

Check out our testing stats on specificity and sensitivity below:

For press or partnerships, contact us here or check out our Partnerships page.
see our b2b page

By providing my email address, I agree to receive email with marketing communications from TBD Health including news, promotions and exclusive offers. I understand that I can opt out at any time by using unsubscribe links. Visit our Terms of Service or Privacy Policy for more information.

Our offerings
Clinic
At-home
About
Learn
Support
Contact us
FAQ
Partnerships
More
STD Questionnaire
Pay it forward
Location
8 E Charleston Blvd
Las Vegas, NV
89104
Subscribe to the newsletter
Privacy PolicyTerms of ServiceConsent to Telehealth ServiceRefund Policy
TBD Health facilitates access to testing services on behalf of its customers. TBD Health is not a laboratory and does not manufacture or own any laboratory tests or medical devices. TBD Health offers its customers access to licensed healthcare professionals via telemedicine in Florida, Washington, Nevada, Connecticut and Massachusetts, or in-person at its Nevada clinic.
2022 TBD Health Inc. All rights reserved.